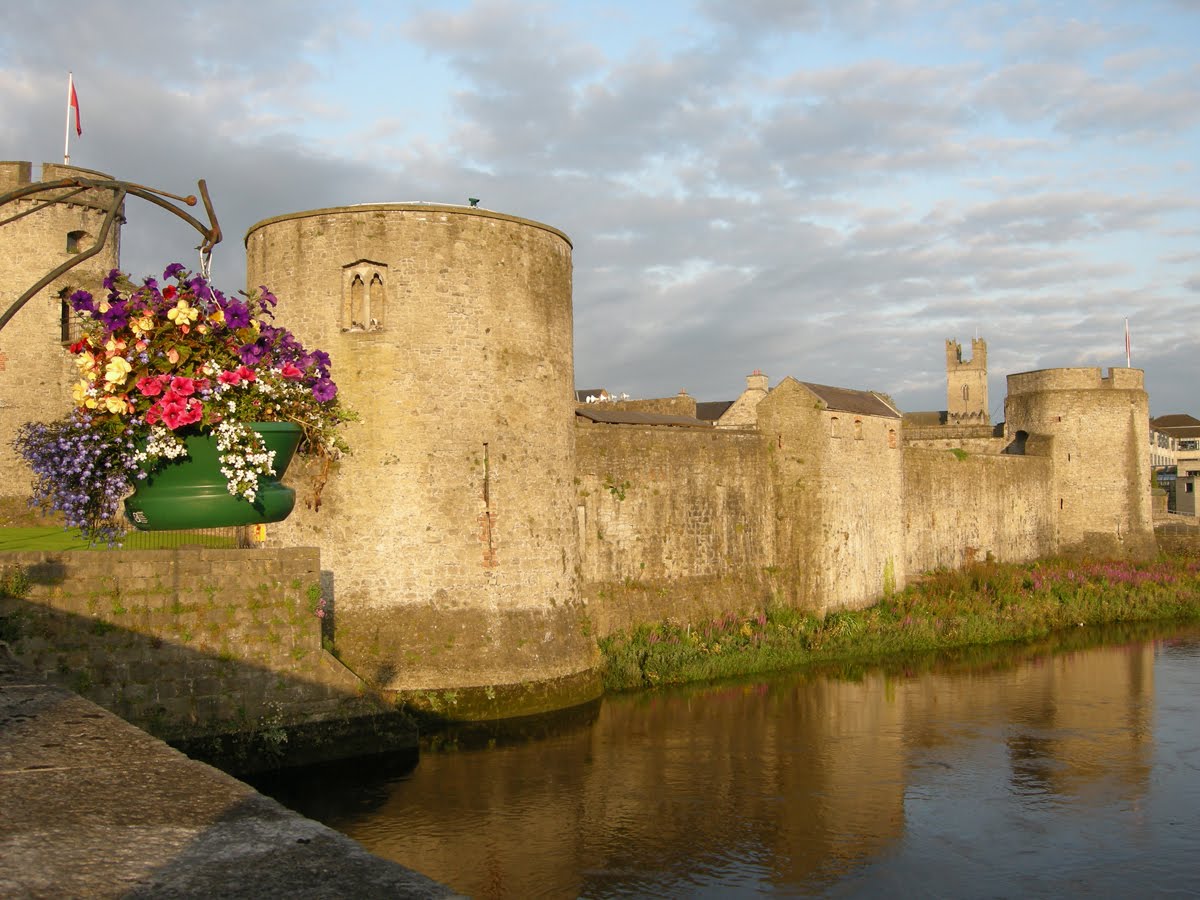 A view of King John's Castle from the River Shannon. Behind the castle turret is the end of Convent Street where Bridget and John's daughter, Mary, was born in 1865, just before Bridget left for America to join her husband John. Photo July 2011.

About John Thompson/Thomas and Bridget Reidy

John Thompson/Thomas was born in Ireland c 1831 and married Bridget Reidy (Riedy/Ready) c1851 in Ireland. Bridget was born in Ireland c1831. They used the Thompson and Thomas surnames interchangeably, but settled on Thomas prior to coming to America. In 1866 the family immigrated from County Limerick, Ireland, to Chicago, Illinois. They had eight known children, six born in Ireland and two born in Illinois. Bridget [Madigan/Thompson Genealogy] the oldest was born 1852 in or near Limerick City, County Limerick and died in Chicago in 1935. The other children born in Limerick include: Mary Ellen (c1855-1906); Patrick (1857-b1866); James (1860-1932); Martin (1862-1898); and Marian/Mary (1865-b1866). The two youngest children John (c1867-1879) and Lillian Marie (1869-1928) were born in Illinois, most likely, Chicago. The mother, Bridget, died of heart failure and pneumonia on May 3, 1900. Father, John, died of pneumonia three years later on May 21, 1904. They are both buried in Mount Olivet Cemetery in Chicago, Illinois 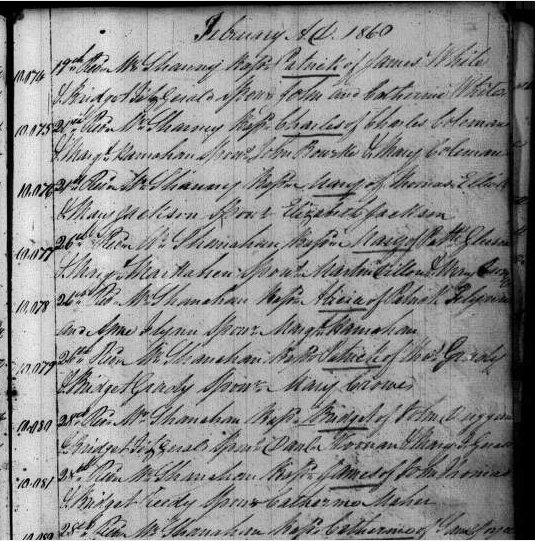 Notes:
1. This is the first time I see Bridget's name spelled Reedy
2. Catherine Maher was also the sponsor of Patrick Thomas, b1857 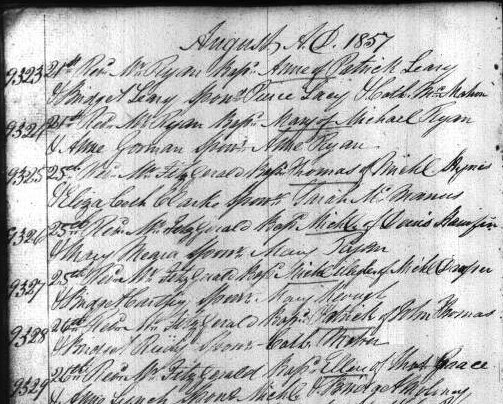 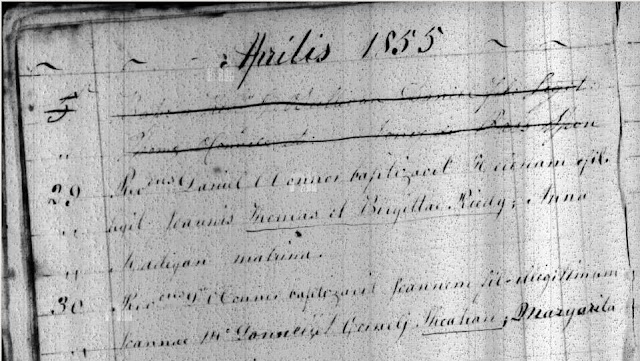 Notes:
1. "fil. legit." is an abbreviation for either legitimate son or daughter. Son = filium/filius; Daughter = filia/filiam.
2. Helenam or Helena is Latin for the following names: Helen, Ellen, Nell, Aileen, Eileen
3. Thanks to Dan Moore for locating this document in the Parish of Parteen.

On October 6, 1886, at the age of 26, 21 years after arriving as a small child in the U. S., James Thomas became a U. S. Citizen. He filed his naturalization papers in the Superior Court of Cook County, Illinois.

In 1886, naturalization was still being coordinated at the local level and, unfortunately, the papers do not provide much genealogical information.

This document is from a Superior Court docket book. 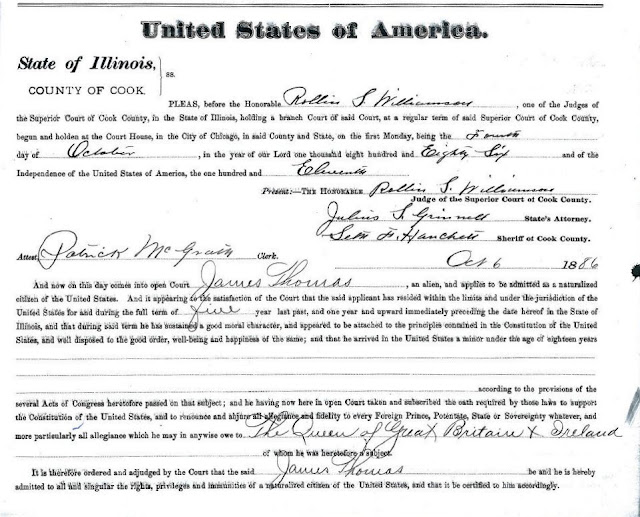 Thanks to Dan Moore for identifying the existence of this document and providing me with the information to locate it.

On March 27, 1894, Martin Thomas, third son of John and Bridget (Reidy) Thomas/Thompson, became an American citizen. He was approximately 32 years old when he was granted his citizenship. On the document, he states he was a native of Ireland and he arrived in the United States as a minor. This is confirmed on the passenger list where he is listed as traveling with his Mother and siblings, arriving in New York City on September 8, 1866 at the recorded age of 3. It is sad to think, within 4 years from becoming a U. S. citizen, he would die of tuberculosis on May 7, 1898. 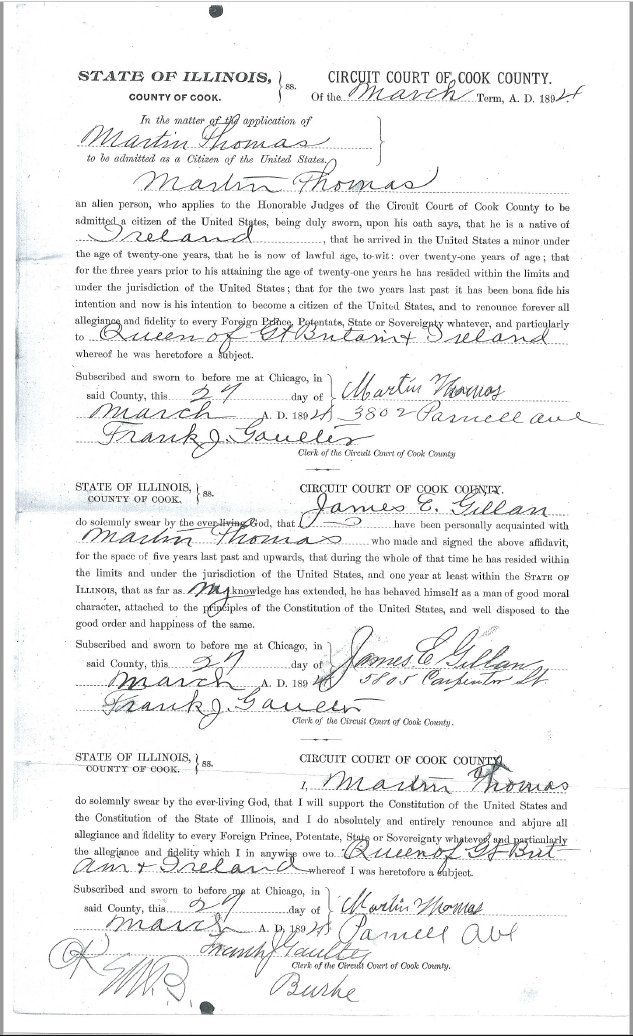 James E. Gillan, 5805 S. Carpenter, Chicago, signed Martin's naturalization papers as a witness to his "good moral character." At this point, James E. Gillan is not a known family associate.

Thanks to Dan Moore for locating in the U. S. Department of Labor, Immigration and Naturalization Service index the information that allowed location of Martin's naturalization papers.

In an earlier post, I noted there was no grave stone on the John/Bridget Thomas grave at Mt. Olivet Cemetery, Chicago. My gift for my birthday this year from my husband was a stone that lists all the individuals buried in Lot S 112; Block/Section 41. 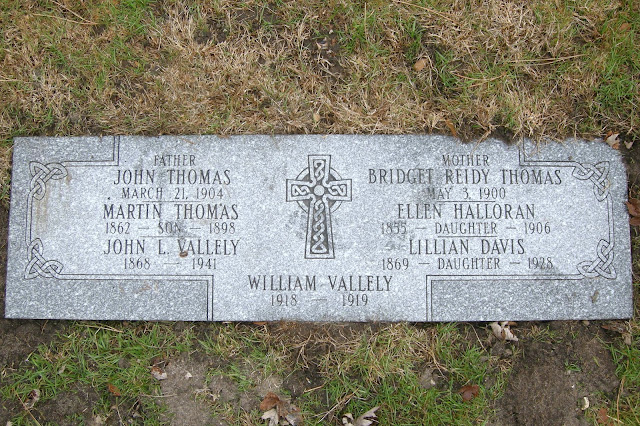 Buried in the same set of graves: 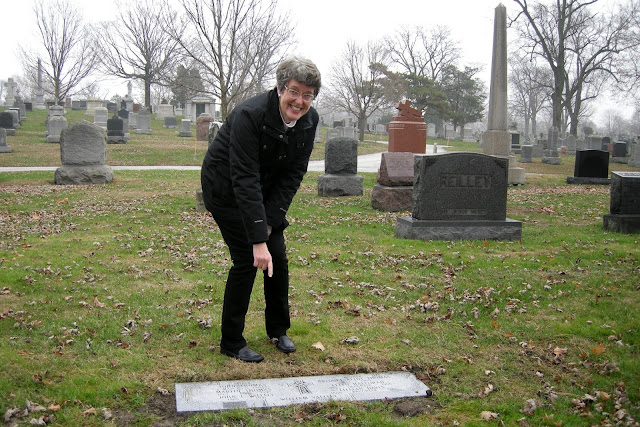 Is This Blog Still Active?

As new information is located and lends itself to posting on the blog, it will be shared here. So, even though there may not be recent posts, the blog is still active. If you have a question, email me at elaine.beaudoin@gmail.com

If you are a descendant of James Thomas and Bridget Kennedy and are willing to take a DNA test - Y DNA or Autosomal - there is a sponsor who is willing to pay! We are particularly looking for a Thomas male to take the Y-DNA test to prove back the Thomas line, but would be happy to offer an autosomal DNA kit to any descendant. Please contact me if you are willing.

TO ENLARGE AN IMAGE, DOUBLE CLICK ON IT AND IT WILL OPEN LARGER IN A SEPARATE WINDOW. YOU MAY NEED TO CLICK ON IT AGAIN TO FULLY INCREASE ITS SIZE.

Elaine McIntyre Beaudoin
Elaine has been working on her family history for more than 25 years and is particularly interested in Irish and Chicago genealogy. She is retired from DePaul University and holds a master's degree in Library Science and an MBA. Elaine became interested in using blogs as a way to communicate with her family, grammar school friends and university colleagues in 2010, establishing, over time, 15 different blogs. She has served as the Road Trip Chair and Archivist for the Computer Assisted Genealogy Group - Northern Illinois (CAGGNI) and is the immediate past Chair of the DePaul Emeritus Society. Elaine is a member of the National Genealogical Society (NGS), New England Historic Genealogical Society (NEHGS), Chicago Genealogy Society (CGS), Computer-Assisted Genealogy Group - Northern Illinois (CAGGNI), and the Irish Genealogical Society International (IGSH).